Protect Your Critical Electronics Gear From Attack In Just Seconds...

And Give Yourself a Massive Advantage
When Everyone Else is in the Dark!

The danger of nuclear weapons falling into the hands of hostile actors like Kim Jong-Un, Iran or ISIS gets all the headlines...

And rightfully so. However, one of the greatest potential dangers we face is that of an EMP attack or solar flare hitting our power system.

So what exactly will life look like after an EMP blast? I used to picture a temporary power outage. We would light candles and listen to the radio until the power came back on.

I was wrong…this is not that kind of power outage.

You can expect there to be chaos within minutes of the blast.

These EMP blasts generate a surge in current that can fry anything electrical. This includes cellular phones, computers, cars, subways, planes, televisions, and radios.In either case, the entire power grid could be shut down!

What you really need to think about is how this will affect you short term. Cellular phones and televisions going down are an inconvenience, but am EMP event could result in people dying in the first few days.

No power means water sources, refrigeration, air conditioning, heating, and lights would all be down.

People could die from dehydration, exposure, or starvation.

That’s why savvy survivalists make preparations for such an event by purchasing stand-along devices like solar chargers, walkie-talkies, ham radios and other communications gear.

Just having a few inexpensive pieces of tech can give you a massive advantage when everybody else is without technology.

But they won’t be any good to you if they get fried by the initial EMP or solar flare.

It’s vital that you protect your critical stand-alone devices so you can use them once the danger has passed. So how do you go about protecting your important gear?

The answer can be found in the SurviveTek Faraday Bag Combo Kit. This inexpensive solution can protect all of your personal devices from outside threats.

Here's What Savvy Survivalists Do

The SurviveTek Faraday Bags can block an EMP blast from frying your electronics, and can even protect them from a lightning strike.

In a world that has gone dark, simple things like having access to light an communications would give you a tremendous advantage.

A small solar panel, flashlight, set of walkie-talkies and some rechargeable batteries protected by a Faraday Bag put you far ahead on the survival curve.

Many of the Faraday Bags you see in the marketplace have simple flaws that make them less effective in the face of harmful radiation or attacks from hostile actors.

They either use inferior shielding layers, have poor seals, or do not provide an inner layer to completely defend your gear from attack.

And they are often too small, or too large to be convenient to meet your every day carry needs.

That's why we designed the SurviveTek Faraday Bags Combo Kit as a two-part system to protect your critical gear against electromagnetic pulses, solar flares and other dangerous types of electrical radiation.

The first part of the system is the SurviveTek Faraday Bag itself. This bag uses an internal ISO Tech copper weave to protect your electronics against radiation and other intrusive signals.

It's the only Faraday Bag on the market with dual layer protection! 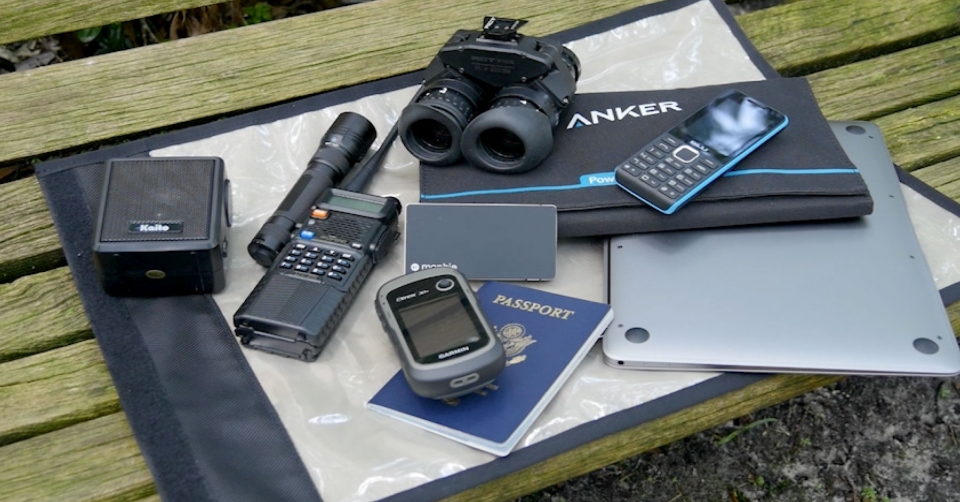 All SurviveTek Faraday bags have identification windows located on both sides. These allow you to easily place labels to list what equipment you have stowed in each bag.

The Combo Kit comes with two different sized bags...the Trekker is perfect for a small bug out or get home bag, while the much larger Vault is ideal for protecting your communications gear, cell phone, night vision optics, flashlights and even a laptop or tablet.

You never know when an event will occur that wipes out any and all unprotected technology. There are several ways this could happen, so it is vital that you have a way to protect your stand alone devices to be used after these events.

Just having a few inexpensive devices in a protected area could make all the difference when everybody else is completely without technology.

The world is a dangerous place, but you can be prepared...not scared. Don't delay, you'll never regret your decision to make an investment in a quality Faraday Bag system like the SurviveTek Combo Kit.

You get the SurviveTek Faraday Bag Combo Kit (an $80 retail value) for just $49.95. That's a 38% discount.
PLUS Free Shipping, but only if you order today!

Click the Button Below Now to Claim Yours While Supplies Last!

All testimonials are true. Some identities and photos have been altered for the privacy and protection of requested individuals.

PS: If you are unhappy with your SurviveTek Combo Kit in any way, simply return it for a full refund. No questions asked!